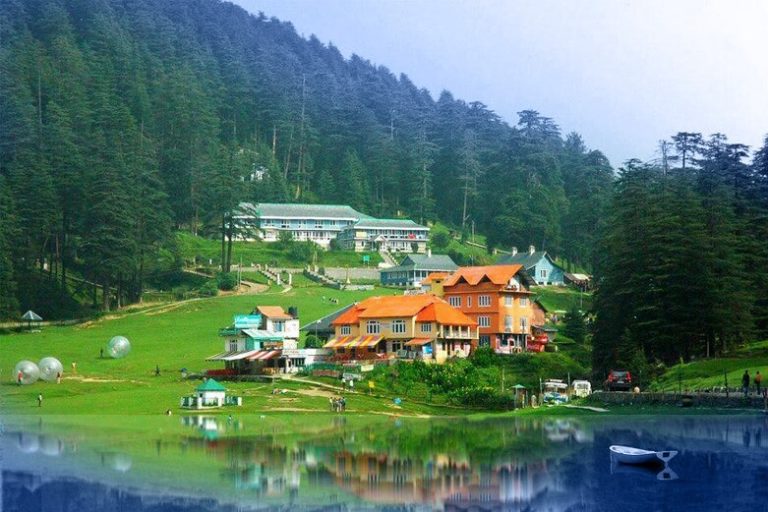 The beauty of Khajjiar we found even as we heard about it. Located on a small plateau, Khajjiar is a vast plain, just like a soccer of green grass. Tall pine and cedar trees around it stand like sentinels. A small lake is cast in the middle of the grass field. It’s a beauty and it shines. Is the eye, is the empire of greenery all around. The tourists who come here cannot escape the gentle nature of hypnosis. First, we visited the temple Khachchinag. Mountain style stone slate roof, it is the temple of the north Gupta dynasty. Inside the temple, there is the statue of Khachchinag. In the canopy, Idols are made of wood of the Pandavas. In exile, the Pandavas had spent some time here. Out of curiosity, we wanted to know about God Khachchinag from a devotee. He told that once upon a time, a Mahatma came here. He came to know that this small lake was extremely deep and was the abode of the gods. Curious to measure the depth of the lake, he set about making hay rope. He made rope for a year, but still could not measure the depth of the lake. That made him extremely disappointed. Knowing the diligence of Mahatma, the god of the lake appeared in front of him in the form of a snake and told him that the lake is as deep as Inferno. Mahatma realized that this soccer type valley a worthy place for meditation, sought rights to the valley. In response, the Lord said, “I cannot give ownership of the valley, but as long as you want, you can eat and live here”. For the devotion of the snake god who offered the right to live and to eat, Mahatma built a temple here, placed a statue of ‘Khajinag‘. Based on this, the name of the place turned ‘Khajinag‘. That changed over time and began to be called ‘Khajjiar‘. Today there are some hotels and restaurants around the temple. Some tourists were roaming around the lake on the velvet grass, some were enjoying some horse riding. On the other hand, the youth dance to the tune of a folk were overjoyed at their own tunes. There is a route of bus in the morning from Khajjiar to Chamba. From Dalhousie, there are two ways to go to Chamba. On the route from Khajjiar to Chamba, locals completely rely on the same bus. The second timing of the bus is in the evening. Shortly we were on the route to Chamba in the morning bus. The most of the houses built in villages are made of sloppy roof with slates. Many crops grown in terraced fields on the slopes of the mountain were scattered different Shades. After an hour ride, river Raavi is seen down in the valley and in front of us, the Chamba town, situated on the hill. Situated on a high plateau city looked like it was built in the mountain town with a shelf. Cross the bridge on the Raavi just started the climb towards Chamba.